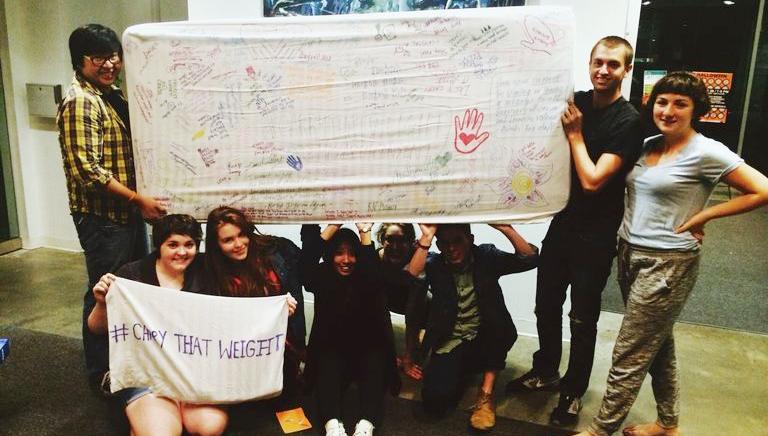 In addition to providing a safe, welcome environment for our students, faculty, staff, and visitors, MassArt is committed to proactively preventing sexual violence through education, training, and programming.

Clothesline Project
The Clothesline Project is a visual display of shirts with graphic messages and illustrations that have been designed by women survivors of violence or by someone who loves a woman who has been killed. The purpose of the Project is to increase awareness of the impact of violence against women, to celebrate a woman's strength to survive and to provide another avenue for her to courageously break the silence that often surrounds her experience. It originated in Hyannis, Massachusetts in 1990 when a member of the Cape Cod's Women's Defense Agenda learned that during the same time 58,000 soldiers were killed in the Vietnam War, 51,000 U.S. women were killed by the men who claimed to love them.

"Carry that Weight"
In Fall 2014, more than 100 college campuses across the US and Canada held "Carry that Weight" protests in solidarity with Columbia University student Emma Sulkowicz, who announced that she would carry her dorm mattress around campus until her rapist, who was still on campus, was expelled.