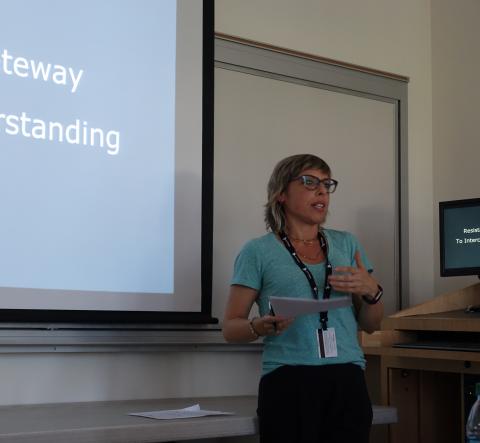 Marika Preziuso is Associate Professor of World Literature at the Massachusetts College of Art and Design. She holds a Ph.D. in Literature from the Caribbean Diaspora and an M.A. in Gender, Society and Culture, both from the University of London, UK.

At MassArt, Marika teaches 20th century and contemporary postcolonial literature, particularly by migrant and diasporic writers, and speculative fiction of the uncanny, magic realism and Afrofuturism. The transnational scope of Marika’s classes actively invites the skill of intercultural understanding.

Marika is also the organizer of Creative Counterpoints at MassArt, an annual series in its fourth year, devoted to the intersections of narratives of creativity and difference as investigated by visual artists, writers, public intellectuals, and other culture makers.

Marika’s academic research explores Western imaginaries of ‘otherness’ and the literary and aesthetic strategies employed by writers, artists, and theorists from the African and Caribbean diasporas to critique and expand such imaginaries and create “opaque” and hybrid spaces for themselves and their art.

As a published poet and RYT yoga and meditation instructor, Marika leads workshops specifically for creatives  who straddle various languages and cultures, to rekindle their creative flow through the practices of meditation, journaling, and verse in translation.

Chapters in Edited Collections and Articles in Peer Reviewed Journals