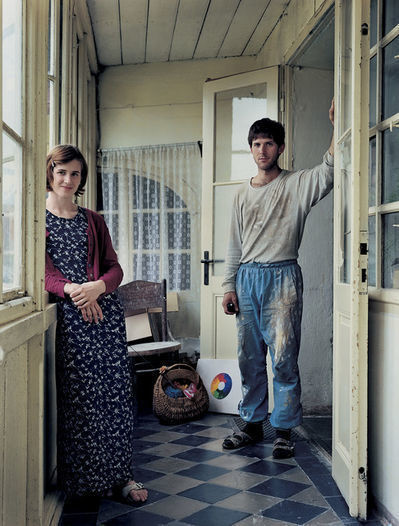 Join us at the MassArt Library to hear Prof. Monteith discuss his latest body of work.

In 2001/02, Matthew Monteith made a body of work titled Czech Eden with the assistance of a Fulbright Fellowship and subsequently published as a monograph. This past year, he received a second Fulbright to revisit the Czech Republic. In his library talk Matthew will be speaking about this recent work creating pairs of photographs made 17 years apart that explore the passage of time and its effects on people and places he knows in the Czech Republic. The pictures work to create a parallax view over time and space that allows the viewer to meditate on both time’s effect on the physical world as well as the shift in the photographer’s intentions and desires. The photographs do not attempt to duplicate the original images exactly but instead emphasize the idea of considering memory in the present using various reference points that ask the viewer to perceive time and space in a similar way that the parallax method uses two slightly different views to accurately estimate distance in photography and human vision.

Matthew Monteith studied at the International Center of Photography before earning an MFA from the Yale School of Art in 2004. He was a Fulbright Scholar in the Czech Republic from 2001-2002, and the resulting work was published as Czech Eden by Aperture in 2006. He was a resident at the Marie Walsh Sharpe Foundation in New York City in 2004-05 and received the Abigail Cohen Rome Prize in Photography from the American Academy in Rome in 2008. In 2015, he received a Pollock Krasner fellowship for his ongoing project The Explainers. His first show at Aviary, The Graduates, was also in 2015. His editorial work has appeared in numerous publications, and his clients include Diller Scofidio + Renfro, Harvard Art Museums, The Deste Foundation, Microsoft, and many others. His work has been exhibited in solo exhibitions in New York, San Francisco, Austin, Kyoto, Paris, Arles, and Cherbourg as well as in group exhibitions in New York, Charlotte, Miami, Washington D.C., Rennes, Ljubljana, Pula, Prague, Rome, and elsewhere. He is an Associate Professor of Photography at the Massachusetts College of Art and Design in Boston.

Light refreshment will be provided.