The Bakalar & Paine Galleries at MassArt present A Century of Style: Masterworks of Poster Design 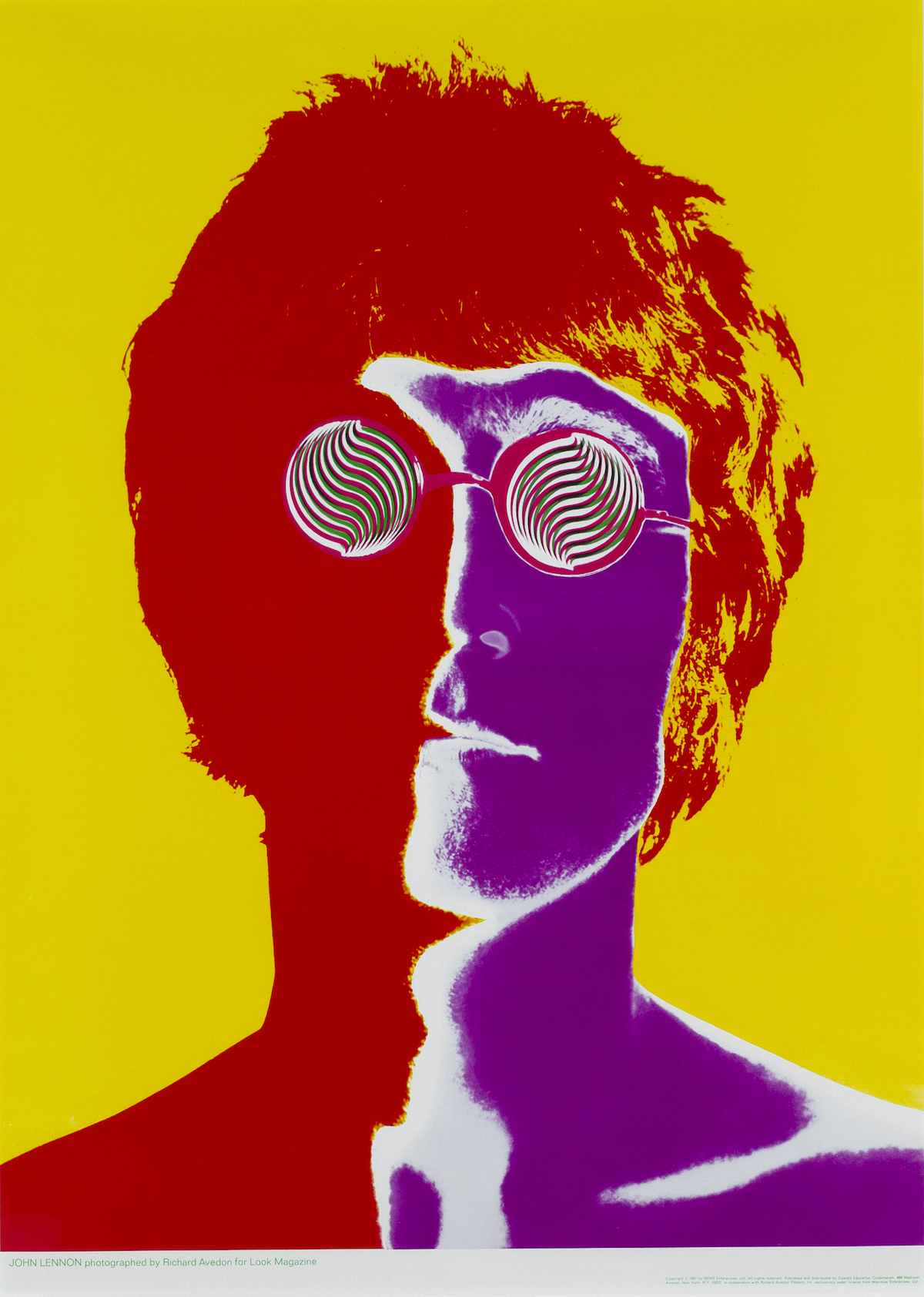 The Bakalar & Paine Galleries at MassArt present
A Century of Style: Masterworks of Poster Design
On view September 19 – December 3, 2016
Free and open to the public

Boston, MA – August 22, 2016 – The Bakalar & Paine Galleries at MassArt present A Century of Style: Masterworks of Poster Design on view September 19 through December 3, 2016 in the Stephen D. Paine Gallery.

A Century of Style: Masterworks of Poster Design spans the breadth of the art poster’s development, from the emergence of the international poster scene in the 1890s; through the rapid development of the Art Nouveau, Machine Age, and Art Deco styles; and on to the resurgence of the contemporary poster. Exploring travel and leisure, food and beverage, and fashion and entertainment, the graphic works on view include those by prominent artists Henri de Toulouse-Lautrec, Herbert Matter, Ludwig Hohlwein, Roger Broders, and A. M. Cassandre, among many others. These colorful and vibrant lithographs span 100 years and have been selected by Robert Bachelder from his vast collection of vintage posters.

The earliest poster in Bachelder’s collection, Divan Japonais, created by Henri de Toulouse-Lautrec in 1893, marks the golden age of the poster; late 19th century Paris was the center of nightlife culture as well as modern printmaking. Innovations in lithography allowed for larger prints with more variations in colors and textures, which made the poster the ideal medium for advertising cultural attractions. Artists like Toulouse-Lautrec were commissioned to create posters in the recognizable Belle Epoque style to hang in the streets of Paris to attract patrons. 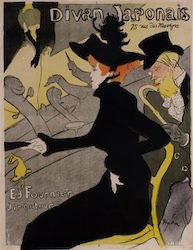 After World War I, Europe and the United States experienced a technological revolution and economic boom through the advancements in motor vehicles, ships and airplanes. Faster, stronger modes of transportation changed the workforce and the tourist economy; workers enjoyed more leisure time, so companies were motivated to produce travel posters to promote their vacation destinations and modes of transportation. Poster artists of this era were influenced by Cubism and Futurism, and the sleek, strong, bold design reflects the technological advancements of the Machine Age.

In the early 20th century, graphic design was still emerging as a professional field and lacked specialization, so clients established poster contests to receive submissions for artwork. Many early and influential poster designers first got their start from these competitions. The Swiss company PKZ sponsored competitions from 1908 through the 1960s. Designers such as Ludwig Hohlwein and Otto Baumberger created eye-catching posters to advertise the men’s clothing line. 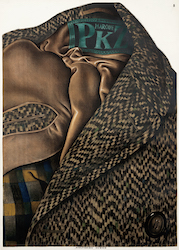 In the 1960s the purpose of the poster changed from advertisement to collectible item and led to a “postermania.” Popular bands and artists created fan-collectible posters using images of the artist and limited text. Milton Glaser’s poster of Bob Dylan enclosed in the slipcovers of the 1967 record Bob Dylan’s Greatest Hits was the first ever promotion of its kind by a record company.

Using a similar psychedelic style, the John Lennon portrait, part of a series of Beatles portraits taken by Richard Avedon, was published that same year in Look Magazine.

Contemporary posters in Bachelder’s collection, such as Paul Rand’s IBM Rebus poster created in 1981, represent the work of graphic design professionals for the purpose of corporate branding. Paul Rand’s interpretation of the IBM logo was temporarily banned, for his application of the iconic blue-and-white stripes did not follow the standards of IBM’s corporate identity system (which he created).

A Century of Style chronicles the history of the poster as it evolved through 100 years of advancements in technology, socio-economics, advertising, and design. This exhibition was co-organized by Lisa Tung and Chloe Zaug for the Bakalar & Paine Galleries at MassArt.

Robert Bachelder first discovered vintage posters while on a business trip to Zurich in the 1980’s. Drawn to the striking color, compositions, and strong graphic quality of the images, Bachelder appreciates the poster’s historic significance of art intersecting commerce and its impact on the fields of design and advertising. Deftly searching for works that “keep me awake at night,” he is a passionate advocate for posters, sharing them with the art and design community as well as the public.

In the early 1990’s, Bachelder began his collection with an iconic Hohlwein Kaffee HAG Tennis poster and went on to acquire hundreds of original lithographs ranging from the 1890’s Tolouse-Lautrec cabaret posters to late 20th century modern designs. His collection is focused on posters created by the use of stone lithography, but includes examples of offset and silkscreen printing. Bachelder primarily collects works that reflect the culture and style of the time in which they were created through imagery of fashion and entertainment, food and beverages, and travel, sport and leisure activities. His collection is particularly centered on the Art Deco era, when artists used the new lithographic technology combined with the renaissance in printmaking to capture the optimistic and aspirational spirit of the age. Artists for the first time could expose their work to thousands of people in the “gallery of the street.” Bachelder is drawn to the inclusive and populist nature of poster art.

This is the first exhibition of Bachelder’s collection, but premier institutions such as the Museum of Fine Arts, Boston and the National Gallery of Art have borrowed works from him. In addition to vintage posters, Bachelder collects other works on paper including etchings, photographs, and paintings.

Robert Bachelder is a Managing Director of Wealth Management at Morgan Stanley in Boston, MA. In addition to his collecting activities, he is involved with several New England non-profit organizations and arts institutions and is a Director on the MassArt Foundation Board.

Family Day
Saturday, October 22, 11am – 4pm
Free and open to the public
Twice a year, visitors of all ages are invited to Family Day at the Galleries. Drop in for fun-filled art making activities, designed and led by MassArt art education students, inspired by the exhibitions on view. Refreshments served.

Location
MassArt
621 Huntington Avenue (Avenue of the Arts), Boston
Enter through the Design and Media Center

About The Bakalar & Paine Galleries

About the UNBOUND Campaign

In May 2016 MassArt officially kicked off the public phase of its UNBOUND: Campaign for the Bakalar & Paine Galleries with a $1 million gift from Pace Gallery founder and MassArt alumnus Arne Glimcher (BA’60, Painting). The UNBOUND campaign’s public phase seeks to raise $5 million towards the $12 million total. UNBOUND will fund a transformative revitalization of the 8,000 square foot, three-floor gallery space, which is the largest free contemporary art space in New England and currently showcases 4 exhibitions per year by some of the world’s most influential and emerging artists in contemporary art. Campaign funds will support restoration and preservation within the historic galleries that occupy one of the original campus buildings. Renovations will allow for improved public access with a visible street-side front entrance on Huntington Avenue, updated HVAC systems for year-round programming, new curatorial offices, and an expanded preparatory workshop. designLAB Architects have been selected to spearhead the project.

Massachusetts College of Art and Design is one of the top colleges of its kind in the United States. Founded in 1873, MassArt has a legacy of leadership as the only freestanding public college of art and design in the country and the nation’s first art school to grant a degree. The College offers a comprehensive range of undergraduate and graduate degrees in art and design, all taught by world-class faculty, along with continuing education and youth programs designed to encourage individual creativity. Whether at home in Boston or on the other side of the globe, the artists and designers of MassArt are dedicated to making a difference in their communities and around the world. MassArt recently received the prestigious 2015 Community Engagement Classification by the Carnegie Foundation for the Advancement of Teaching for its dedication to community engagement through public programming and curricular opportunities. For more information, visit massart.edu. Follow MassArt on social media: Twitter @MassArt, Instagram @massartboston, Facebook.com/massartboston, and LinkedIn.